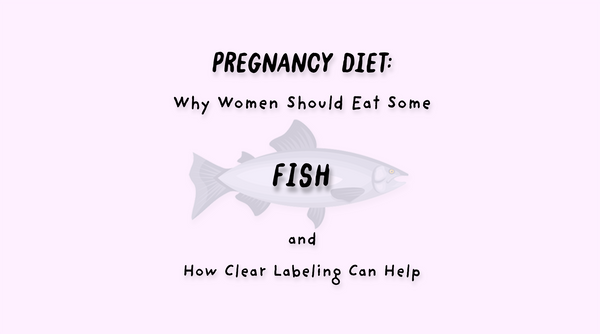 Pregnancy Diet: Why Women Should Eat Some Fish and How Clear Labeling Can Help

In 2019, there were around 3.75 million live births in the United States. That means more than 3 million pregnant women had to adjust their diets during the year. Diet plays an important role in the growth and overall health of not only the baby but the mother too.

Often, first-time mothers are confused as to what they should and shouldn’t eat. Typically, the recommended diet for a pregnant woman follows the general healthy eating guidelines with a few additions that are focused on pregnancy nutrition. In particular, foods that are high in folate, iron, calcium, and omega-3 fatty acids are often recommended, while alcoholic beverages, fish with high mercury content, and raw foods that may cause foodborne illness are avoided. This approach is recommended for expecting mothers as it lowers the risk of pregnancy complications and may reduce the incidence of birth defects.

When pregnant, many women do make changes to their diets, but of all the nutrition advice they receive, the advice regarding fish tends to leave them the most puzzled. Expecting mothers are told to eat fish because many types are high in omega-3s, which is important for the growth and development of the baby’s brain, but then they are also told to avoid fish as some of them contain high levels of mercury, which could lead to birth defects such as brain damage. They must also keep in mind that consuming raw seafood poses a risk as it may contain harmful bacteria or viruses that can put the baby at risk. The conflicting messages often confuse expectant mothers and cause them to leave fish out of their diet entirely – which is not ideal.

To understand how difficult it is to properly discern which fish products (canned, frozen, and fresh) are appropriate for the pregnancy diet, we took a look at the majority of fish products available in major U.S. grocery stores via the Pinto database and sorted them. Surprisingly, we found that the divide is practically down the middle for products that are generally safe to consume versus those one should avoid. This illustrates how tough it is for pregnant women to pick the right products.

Since half of the products in the fish category are not considered healthy enough for pregnant women, it’s easy to see why many choose to avoid fish altogether. However, this doesn’t have to be the case. Fish are a great source of omega-3s, zinc, iron, and protein, all of which are nutrients that are essential in ensuring the healthy growth and development of the baby. Thus, such seafood options really should be included in a mother’s diet.

Quick guide to picking the best fish to eat while pregnant

So which fish products are safe for pregnant women to eat? According to the FDA, in addition to picking the right fish, the frequency of consumption is also an important factor. The FDA provides a handy graphic that clarifies which fish pregnant women can eat and which ones to avoid.

Among the fish considered generally safe to consume, the FDA has two categories: best choice and good choice. The distinguishing factor is the mercury content in the fish. The best choice category includes fish that can be eaten two to three times a week, while the good choice grouping consists of fish that can be eaten once a week. If consumed at this frequency, the mercury levels in the fish pose no danger and the nutritional benefits from the fish can be enjoyed by the mother. Those with the highest mercury levels, however, should be avoided entirely.

To accurately evaluate the breakdown of fish products in the market based on the FDA’s dietary advice, we took a look at the fish products that were considered safe for consumption by pregnant women and separated them out based on whether they were best choice or good choice fishes.

This means that a large number of products fit the criteria for best choice fish. Moreover, best choice fishes tend to be highly familiar varieties such as salmon, cod, tilapia, and sardines. Apart from being a good source of protein, omega-3s, and iron, fish also has more vitamin B12 and vitamin D than any other type of food. This is important as getting adequate amounts of vitamin B12 or vitamin D is good for the overall health of both the baby and the mother. In addition to that, it may also reduce the risk of preeclampsia which – if left unchecked – could lead to complications and cause harm or death to both the mother and baby.

High mercury content isn’t the only factor to worry about

Mercury levels in fish don’t typically pose a significant risk for most adults. However, if pregnant women eat fish with high mercury content, this could cause mercury levels in the mother’s bloodstream to accumulate, and that could eventually lead to damage in the baby’s brain and nervous system.

With that said – the fear may be overblown as there are only a handful of fish that have high mercury content. As per the FDA guidelines, there are only seven types of fish that they advise expectant mothers to avoid due to high mercury levels. Meanwhile, over 50 different types of fish are recommended due to their nutritional value and lower mercury levels.

In fact, we found that though fish with high mercury levels should be avoided, most of the problematic fish products on the market are those that actually contain high sodium and high saturated fat levels.

In the case of pregnancy in particular, high amounts of sodium in the diet could cause water retention. Many pregnant women are already familiar with how their feet or ankles tend to swell during pregnancy, but higher sodium intake could lead to more severe swelling. High saturated fat levels, on the other hand, could lead to unbalanced lipid levels in the body, which increases the risk of preterm birth. Thus, eliminating products high in sodium or saturated fats is beneficial overall for expecting mothers.

Making healthy food choices while pregnant can be quite challenging for expectant mothers. These mothers have to deal with sudden cravings, morning sickness – and in some cases – confusing nutrition advice. This can make grocery shopping daunting, but it also means that grocers can help. With appropriate tagging and in-store and online resources, grocers can help narrow down and recommend seafood products that are nutritionally beneficial for expecting mothers. In the case of the fish category specifically, information should be prominently displayed to clarify which fish varieties may be high in mercury, sodium, or saturated fats, and which ones are the best choices for pregnant women to consume.

This can extend across other categories too – such as the snack aisle, where many pregnant women frequent when their cravings hit. Snacks with higher nutritional value, such as healthy fruit or vegetable snacks, should be promoted to pregnant women. With a more rigorous tagging system, grocers can play a key role in helping expecting mothers select appropriate foods, optimize their pregnancy nutrition, and ultimately promote their own health as well as that of their babies.