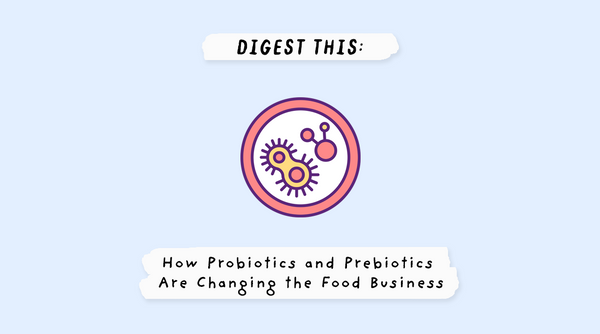 Digest This: How Probiotics and Prebiotics Are Changing the Food Business

In the last few years, American consumers have been paying more attention to their digestive health. Digestive supplements such as probiotic pills saw significant growth on Amazon during 2020, with revenue rising from $27 million in January to $51 million in November. Though some may suggest that the rise in probiotic sales can be attributed to the pandemic, this trend extends back to 2018, where a study reported that 1 in 20 U.S. citizens had used non-food probiotics, prebiotics, or synbiotics in the past 30 days.

However, supplements aren’t the only way Americans are getting their biotics. Many are looking to fermented foods or beverages like kimchi and kombucha. In the first quarter of 2021, the U.S. saw its imports of kimchi grow by 80.6% from the previous year. That’s a total of $8.46 million worth of the fermented dish being imported in the first three months of the year alone. In the same vein, kombucha has seen explosive growth over the years. In 2014, the kombucha category only posted $1 million in sales while in 2019 that figure grew to $1.8 billion, making it one of the fastest growing categories in the food space.

Despite the interest around both prebiotics and probiotics, some people are still confused about what the terms actually mean. Fret not—we’re here to solve that mystery.

Probiotics and prebiotics are not the same thing

Despite what some people may believe, the terms probiotic and prebiotic are not interchangeable. Probiotic is typically the term that most are familiar with. It refers to the “good bacteria” that is commonly added to and found in fermented products like yogurt, kombucha, and the like. Prebiotics, on the other hand, consist of dietary fiber and serve as a food source for the good bacteria (probiotics). To sum it all up,

So, why is all of this important and how does this affect gut health? Well, the human gut contains billions and trillions of microbes and this is often referred to as the gut microbiota. Though gut microbiota research is still a nascent field, many studies have found that the composition of the microbiota and their interactions have significant impact on not only gut health but overall health as well. Thus, eating probiotics allows you to introduce good bacteria to your gut microbiota. Eating prebiotics encourages the growth of the good bacteria. In turn, that produces postbiotics, the actual compounds that may confer health benefits ranging from reducing inflammation to improving immune health.

Probiotics have long been a part of the American diet because they are key ingredients in yogurt. Prebiotics, on the other hand, have had a hard time gaining traction. Americans do not eat nearly enough fiber. According to the U.S. Department of Health and Human Services, more than 90% of American women and 97% of American men do not consume the recommended amount of dietary fiber, which is 25g for adult women and 38g for adult men. As more and more consumers look for ways to add more fiber to their diet, manufacturing companies are starting to listen.

Inulin is a dietary fiber that is found in a host of vegetables but most notably in chicory root. In direct response to consumers wanting more fiber, and by extension, prebiotic content in their food products, inulin (sometimes listed as chicory root fiber/extract) is finding its way into a multitude of products on the supermarket shelves. From granola bars to yogurts, inulin is a fiber-boosting ingredient found across multiple categories.

Recently, there has also been a rise in interest in functional foods. That means that consumers want their snacks and beverages to not only taste good but also confer some form of benefit. In the past few years, snacks such as puffs, cookies, kraut crisps, and superfood popcorn have been introduced that contain prebiotic ingredients. Even large CPG brands like Ocean Spray have jumped on the functional foods trend and have released a host of functional fruit medleys, including a “Fiber Blend.”

Can you get fiber through soda?

Interestingly, in the beverage space there has been a rise in prebiotic sodas. Conventional sodas have a ton of sugar and zero health benefits. At best, they are empty calories. Prebiotic sodas are trying to change that. Though many of the big CPG brands have released diet, low sugar, or zero sugar versions of their products, these new prebiotic sodas take it one step further.

The prebiotic sodas on the market like Mayawell, Olipop, and Poppi have flavors that range from fruity to classics like cola and root beer so there’s something for everyone. Unlike regular sodas that have over 30-40 grams of sugar, they only have around 4-6 grams of sugar. Plus, they contain prebiotic ingredients! Which means that these sodas can have anywhere from 2 grams to 9 grams of fiber while conventional sodas have 0 grams.

In the case of Mayawell, the company uses agave to add prebiotics to the drink. Olipop, on the other hand, contains a blend of prebiotic ingredients including nopal cactus and a variety of root fibers and extracts like cassava root, chicory root, and kudzu root. Meanwhile, Poppi keeps it simple by adding apple cider vinegar as their source for prebiotics. All in all, these sodas are lower in sugar, have the added benefit of improving gut health via their prebiotic ingredients, and they taste great. Talk about functional!

The future of biotics in the American diet

Will Americans turn to supplements to get their biotics or will they try to get them directly through their food instead? While probiotic-rich yogurt has always been a part of the American diet, yogurt sales have declined since 2015—the peak year for the category.

The fact that consumers are beginning to shift away from dairy products has definitely affected the yogurt category. However, companies are trying to keep up with the trends. A host of companies from Chobani to new players like Oatly are making plant-based yogurts to cater to the ever-growing plant-based trend. Other companies like General Mills have shifted to making high-protein yogurts because consumers are increasingly choosing products with more protein. The yogurt players in the market seem confident that with these changes, the category will rebound soon.

While yogurt may be having a hard time, globalization has increased the prevalence of other fermented foods in the American diet, especially those from different cultures such as kimchi and kombucha. So, it seems like probiotics will find their way into the American diet one way or another.

In the prebiotics domain, however, it has always been difficult to get Americans to eat their fiber. In fact, the Dietary Guidelines for Americans have identified fiber as a “nutrient of concern” since 2005. Americans tend to overestimate the amount of fiber they actually consume. Though it has been a long time coming, it seems that the food industry is finally responding to the consumers’ need for fiber by making it a little more palatable. It may be difficult to get every American to eat more vegetables and fruits, but it is relatively easy to get them to eat cookies and drink sodas that contain fiber/prebiotics. The addition of inulin into familiar products and the explosive growth of the functional foods category is indicative of the trends in the market right now. As probiotics and prebiotics become ubiquitous in everyday foods, Americans may finally start reaping the health benefits from good bacteria and a fiber-rich diet.